Catherine married Edgar and their baby makes 3.
Catherine's brother is the jerk known as Hiindley.
Heathcliff is named after some dead child
by Catherine's father who rescued him before he became wild.

Hindley goes away but comes back when he inherits.
He's a man of bad temper and very few merits.
He marries a woman who has TB, they have a kid, his name is Hareton, His mom he'll never see.

Hindley now bitter rules the house with a heavy hand,
and Heathcliff is sent to work on the land.
Catherine is groomed for a monied marriage - to Edgar's house she goes in the family carriage.

There's something wrong with Catherine, she's paler than most.
Walking around - she already looks like a ghost!

Edgar's sister is the girl called Isabella.
When it's time to fall in love she's aware of one fellow.
Isabella may be pretty, she may even have a dimple,
but her understanding of character is really quite simple.

She elopes with Heathcliff, after one night she regrets.
As fate would have it, a child she begets.
Linton is born near London town,
His mom is sick, his health is bad, his dad is rarely around.

When his mom dies, it's really sad. but he's a bit of a jerk and now he lives with his dad.

Not enough so far of Cathy we've said.
She's the baby who's born the night Catherine gets dead.
Her dad is Edgar and he's still alive.
She's a feisty girl, hell bent to survive.

When it's time to fall in love, two cousins are around. Hareton or Linton? Her judgement is not sound.

She marries Linton, it cannot be repealed.
When daddy Edgar dies, her fate is sealed.
Now the daughter-in-law of Heathcliff, true!
She has the temper of Catherine, whom Heathcliff loved and knew.

The death of Linton widows her, and the estate from her dad to Heathcliff transfers.
Mistress of Nothing! Young Cathy hell-bent, is slow to pick up on where Hareton went.

He's been waiting in the wings, his story barely started.
But soon the two cannot be parted.
When Heathcliff finally dies, young Cathy inherits. Hareton turns out to have a few good merits.

It's the happy ending for which we've waited - the only love which the stars of the heath have fated.

(SPOKEN:) Emily Bronte delved into the deep, at 28 years old,
to ask "What is love? And how does it live within the soul?"

Put on your dress and don your cape
as we go on a journey to an ancient landscape
Your pants smell of horses, your jacket of soot.
Where there is no road, you will go on foot.

Unprotected and weather-worn,
beyond the hill you'll hear a hunting horn.
Hamlets and villages made of stone.
An old house in ruins was once a home.

In this time, in this place there is a destiny
For two souls growing crooked as a twisted tree.

We turn our thoughts to the heathen, sensual, Catherine and Heathcliff!

(3) (The Neighbors Asked)
The neighbors asked "but what did he bring?"
"where did he come from, the little brown thing?"
it was Heathcliff, age 7, rescued from the street
and his new family began to feel his heat.

Catherine age 6 is where this story begins,
she took to Heathcliff - like an evil twin.
with the innocence of youth before one ever knows
they romped on the heath choked full of primrose.

Two children grow tangled in their sensuality.
An older brother mangled by his jealousy.
A kind father dies on a forlorn night
to leave these three - undone - looking for a fight.

The weather broke, sleet and snow,
the larks were silent, winds blowing cold -
LIGHT AND SHADOW
This is what happens when people are not whole.
They find something, outside, to complete them - LIGHT AND SHADOW

(H) Owe! She's pinched me on the cheek, says I.
(Cath) I love to look him in the eye.
(H) There's often something wild about her mane.

(Cath) When I come near, your limbs grow slack.
(H) Come closer dear, I'll brush your back.
(Cath) I'll churn you like a tempest on the sea!

Soon Hindley is master of Wuthering Heights
With a heart as black as anthracite
Most wayward, spiteful, violent of them all.

He tastes revenge with every blow.
Heathcliff proud, brought so low,
and Catherine's temper merely folderol.

CHORUS
Demon man, a schemin' man,
Catherine's brother will set the pace
as Chief Hater and Perpetrator,
A snake about to spring…
He's the Savage King!

In another house, more genteel
lived a brother and sister with much less zeal,
unaware of their ill-fated star.

With parents dead, left on their own
to choose a spouse and make a home,
they didn't know that they were playing with fire.

CHORUS
Two quiet kids played quietly
Til their quiet life was history.
The ship of life was cast adrift
when he married Catherine, and she Heathcliff.

You played me as your pet,
some bird you'd teach to sing.
I grew up to expect
you'd give me everything.

I could keep on walking till I've walked around the world,
but the truth keeps walkin' beside me, says "you're my only girl."
I'm so hungry, stay up and howl at night.
So hungry for your love and I dream I hold you tight.
..............

When I held the key to Edgar's heart
I knew that money could play its part
to lift both you and me from poverty.
But the schemes of my foolish heart were only brief!

Well I cried my tears - a long time ago
I married Edgar - just didn't know.
But how's a wife supposed to live
when her love is untrue?
Secret thoughts, like roots entwined with you?

Time torn in pieces now! 3 years later you returned.
But life got complicated - when you married a girl you only hated.

Time torn in pieces now! Visions of madness in my head.
With a husband devout, I'd rather die than live without -

My SOUL, My SOUL!
Hold my hand you'll see it's growing cold!

CHORUS
The sun did warm us when you stood by my side
You chose to run away when the only thing I hurt was your pride.
(7) "In which Catherine Dies"

Heathcliff loved Catherine, she was more than a friend
but Catherine called the shots said this love was a dead end.
Catherine. Catherine. It's more than half a sin to love Catherine.

When he couldn't stand to be apart any more, he showed back up at her brother's front door.
That brother gambled, drank and nearly went mad until Heathcliff owned everything he had.

Now more than a neighbor, less than a friend,
Heathcliff made his march across the heath to see the end of
Catherine. Catherine. It's more than half a sin to love Catherine.

His love. His girl. The only woman he ever loved in the whole wide world,
and she took to her grave the love she kept from him.

Each heart - forsaken...
A fruitless love he bore - he'd settle the score;
his love devout - she just held out;
Never a day - would she betray;
with life and limb - she longed for him;

he could have had her - but she's just a cadaver;
the end of a life - of a love-sick wife!
the sad untimely death of Catherine!
(8) (Lucifer)

Without her - I took on the work of Lucifer.
I delight in the hatred that I incur!
I hate and love. Why do I do it you might ask? ….you see
I don't know - but I feel it happening to me.

Without her - I took on the work of Lucifer.
Her daughter. My son. I keep them prisoner.
I hate and love. Why do I do it you might ask? ….you see
I don't know - but I feel it happening to me. 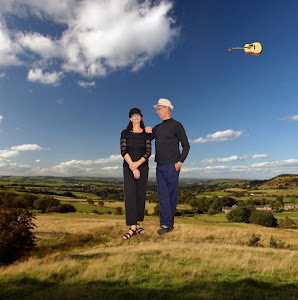 FREE! Online! Listen to the album

Discover more of our storytelling-song-cycle entertainment: 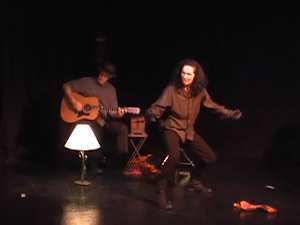 "Wuthering Heights, The Entertainment" is the creative brain-child of Diana Prechter and husband Kent Cole. It was performed at FronteraFest at the Hyde Park Theatre in Austin, Texas in January 2012.

Would your theater group or music ensemble enjoy re-creating this performance? Please contact us with your ideas.

Do you love "Wuthering Heights, The Entertainment" ? 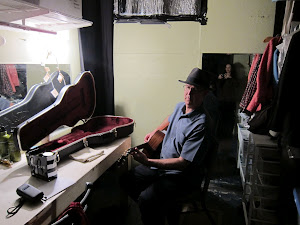